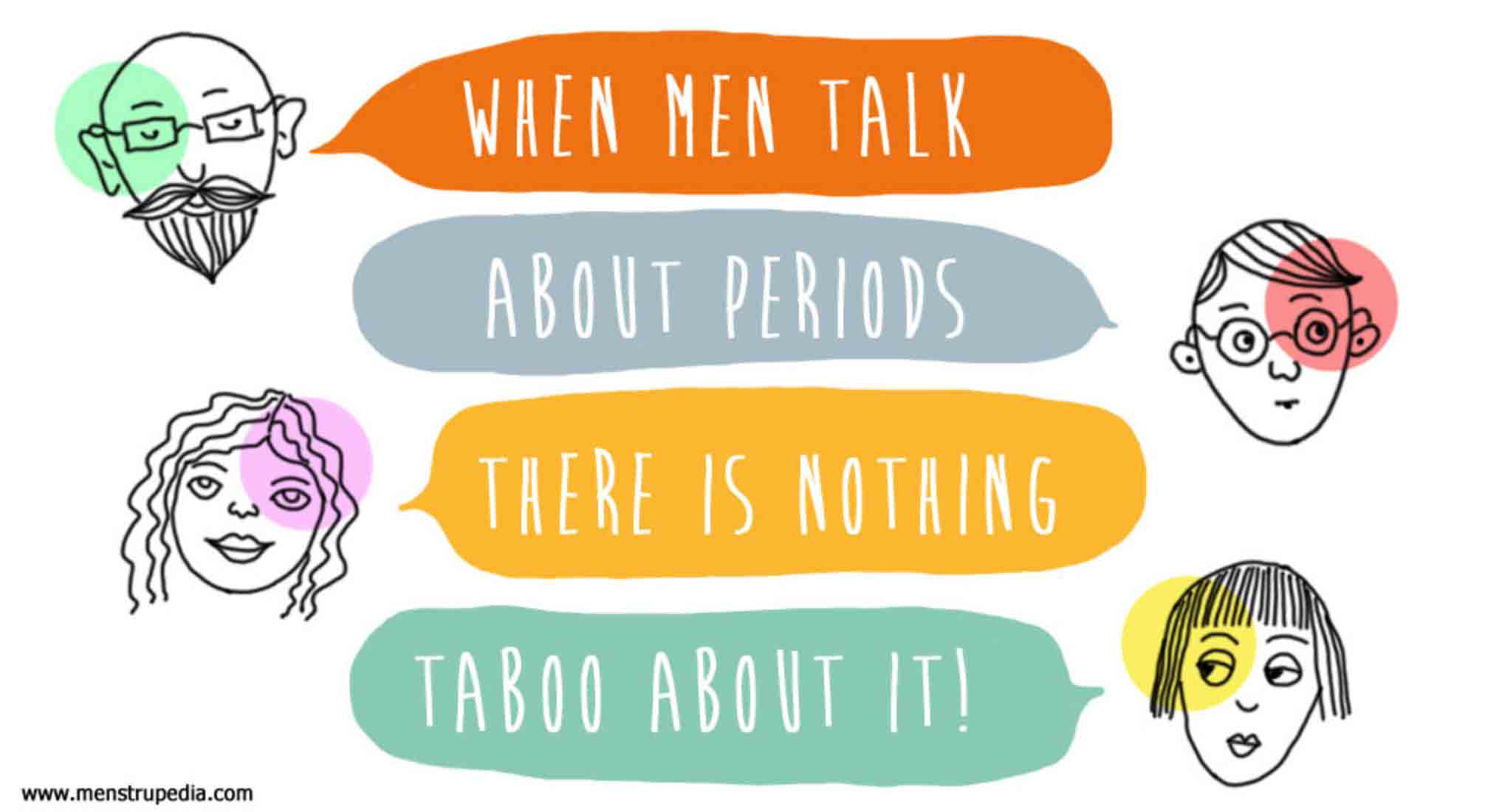 The session of Let’s Talk: We Value Your Say was held on 17th of May at 1 PM NPT on the topic “Men talk about Periods”. As the month of May is Menstrual Hygiene Management month or MHM we decided on this topic to suit with the theme of this month. The discussions ranged from what menstruation is, to how we can try solving menstrual taboos through individual efforts. Putali Nepal team would like to thank all the participants for the amazing contribution to the topic. We also take the involvement of men in conversations of menstruation extremely important and serious.

We approached a lot of boys, of different age (mostly teenagers) for the session. Most of them were unhappy to join the session as it was on menstruation. This kind of highlighted the problem, that is, people take menstruation as a ‘woman’s issue’ not as an issue in itself. This motivated us to work on the session even more. At the end there were 10 participants who were added to the session but on the day itself, only 5 participants were present. Although the number was less, we knew that these men were in their own way unique and very bold. They would be a great help in the discussions as well. The participants included:

There were a few themes we wanted to discuss and wanted to get insights from the participants as well. The themes were as follows:

We jumped into the first theme right after the quick round of introductions. The first theme asked the participants their understanding on menstruation. “In my opinion the view on menstruation, over the course of time, has changed and is changing. It is a natural process but is taken as a taboo in many places. Recently I’ve seen people normalizing periods and menstruation as a whole. In the past where menstruators were considered untouchables for bleeding, now I think people are more open about the concept and even more welcoming to these issues. I have seen people being more inclusive not just in social media but also in their friend circles and people around them. I have been open about this and it is great to see the small changes but we still have a long way to go.” Said Samik Shrestha on what he understood on menstruation. Whereas, to this Sadish Manandhar had to say, “Belonging to an authentic Newar community and being from Kathmandu (the heart of the country) the older generations, fathers, grandfathers still think that menstruation is a taboo. The women are taken as untouchables. The older generations still take menstruating as a sin. But for the new generation, we are very welcoming to this natural process. Every time we wish to change this, the older generation stop us. It is not a superstition anymore, it is a practice that has been forced onto us to be followed.”

Very well put, yes, traditions are being forced upon new generations by the old. The reason why some people follow these rules is because they are forced to. Some might see this happening at their homes while some may have heard of it. Kshitiz Gautam was one of whom who had heard of the wrong doings. He said, “From the perspective of a person coming from an educated and aware family, menstruation has always been a normal topic for me. My female friends have shared their stories on their periods and I’ve always taken it as a normal subject. But with that being said, it’s a topic of taboo in a lot of places, even in the capital females are being restricted on the days they’re menstruating and outside the capital being forced to follow ‘Chhaupadi Pratha’; an inhumane system, because of which many women die every single year. As a younger generation, we are changing and I wish for the change to progress more and not stop.”

There were questions that were running in our heads and wanted to discuss it with our participants. Often we see that some girls brag about menstruating, even challenging non-menstruators, saying that they aren’t capable of handling menstruation. There are also bold statements sometimes about how non-menstruators are not as great as menstruators. This type of toxic positivity that we find on the internet might have brought some people to take it negatively. This was a question we raised to the participants, “Do you think menstruation is something to be proud of?”

“I think menstruation is something to be proud of definitely. Posting on social media is not an issue” said Syed Aman, “As long as it does not harm anyone, I think it’s okay for menstruators to post what they wish. It’s not a bad thing at all. One should feel proud to be menstruating.”

“I think menstruation is something to be proud of definitely. Posting on social media is not an issue”

“I think girls should be proud, we men don’t go through that but these amazing women go through this every month till Menopause. As long as the conversation is about normalizing menstruation, I think it’s absolutely fine,” Said Kshitiz. To this, one of our observer for the session, Rebecca said, “I think when something is pushed far back to one side, it is normal for them to push back in the other direction as well to find a balance. We often focus on the pain during periods, the cramps, the bleeding but there’s something that is not much talked about and that is the power of hormonal change. When you are ovulating, there’s massive hormonal change and the power you feel the moment of ovulation is absolutely great. I feel like a superwoman when I’m near ovulation. When the hormones are pulling you down but at the same time it is pushing you to do something which can be used for our strength as well. I don’t think we appreciate the positive in the cycle as well.”

This was a point that was very important to be made. Often we hear of people pushing harder when the others push them. Trying to find the middle ground is very important but undermining someone is not the way to do it. There are a lot of great things about menstruation that do not come to limelight as much as the cramps and pain. Like Rebecca said, during ovulation there is a surge of energy that makes menstruators more energetic and creative. It’s amazing to bleed, not always but yes there are a lot of benefits!

Another thing we wanted to bring up was the rules that men see at their own homes. When brought up, Chirag said, “In a modern society like ours, even now a lot of families follow some traditions on menstruation. I have asked myself, are following these rules really important? We are where we are today because some people decided that following the old traditions and practices was not good and broke through those barriers. Should we really bar these women from doing what they want to do, or going wherever they want just because they are menstruating? These so called rituals are forcing them not to be best they could be. Successful women aren’t women who followed these rules, but are women who got tired of this nonsense and stood up. Stand up for yourself and that is how we can put an end to these traditions of discriminating women when they menstruate.”

A thought that is really striking, well put by Chirag! “I have never seen anyone follow these rules at home” said Kshitiz, “But that doesn’t mean it doesn’t exist. It has been hampering a lot of women’s lives.” Yes! A point we wanted to bring up as well. A lot of times people might not see what is happening, all the discrimination, all the one sided disgust but that doesn’t mean it’s not prevalent in the society. A lot of menstruators even now have to skip school because they are forced to stay inside closed doors following the rules while menstruating.

So, the questions arises, why do people follow these ‘rules’ of menstruation? What binds them to not stop it even when it directly affects them? It made us think, does religion have to do anything with this?

Upon raising this issue, Syed Aman Ahmed had to say, “I am a very religious man, and I’m interested in all the other religions too. I’ve read all the Vedas and it is important to note that none of the 4 Vedas mention anything about how a woman is impure during her menstruation. So, this understanding only comes in the interpretation from religious experts. All the barriers in religions are not brought in from the religious books or from the words of Gods but from the middleman- the person who interpreted these religious texts. Having religion as the means to discriminate women during menstruation is completely baseless and needs to be stopped through collective actions.”

Yes! The religious books, especially in Hindu religious books, there’s nothing that says that menstruating women should be kept isolated or that menstruation is disgusting. It’s the interpretations that are hampering us menstruators. So, how can one challenge these rules and people who strictly follow them? How can we challenge and change a practice that has been followed for years?

We have brought up issues regarding bringing up dialogues, but how open are we and how comfortable are we talk about menstruation? If someone would openly talk about, would be create a safe space for them or ask them to not talk about it? We asked this question to the participants.

“During the day of Tihar, a festival that is widely celebrated, my sister told me she was on her periods” shared Kshitiz, “That meant that we weren’t allowed to celebrate. But I asked her not to tell our mother and celebrated it anyways. Needless to say, we both are fine and healthy.” Often, like Kshitiz said, when menstruating during a festival, the menstruator is asked to stay away. Having someone menstruate and touch perform religious acts is taken as a sin. But like he said, doing any religious activity while menstruating is absolutely not a sin. Nothing bad will happen if done so. Talking about such problems that are prevalent is so very important.

So what would the participants vow change after the session? “I own a shop and we also sell sanitary napkins. I used to feel embarrassed while selling them but now I’ll take it very openly and not feel embarrassed” said Samik. Hearing this, it felt like the session was a success! That is exactly what we had wanted, boys to not feel ashamed while talking or relating with menstruation! “I vow to not stop buying sanitary napkins for my sister” said Kshitiz which we thought was very sweet!

All these answers warmed our hearts! The change was starting and we didn’t want to stop. What we realized through this session was how privileged some families are to not go through menstrual taboos but the sad truth us, taboos exist and people are suffering because of it. We will continue having conversations regarding menstruation and will include men and boys into these conversations as well. We cannot change the world alone, but with help I’m sure that we can.

We would like to thank our participants for being there and sharing their experiences. We really appreciate what they had to say. The next session will be on Wednesday that is 27th May. If you wish to join any of our sessions, feel free to message us at Putali Nepal on Facebook or Instagram. Thank you for your love and support! Stay Safe everyone!